A hasty generalization is a broad statement based on limited evidence. It can be extremely tempting to make one, especially if you're not sure what else to say. A hasty generalization is an assumption about a group of people based on very limited evidence. A writer might say, "Americans love pizza," or "Women are bad drivers." These statements are not true because they assume that all Americans or women have the same tastes in food and driving ability - and those assumptions are often wrong.

Hasty generalization is a fallacy and should be avoided in all forms of writing. Being able to recognize this type of statement and avoid falling prey to its traps makes your writing stronger and more persuasive. Generalizing is a powerful rhetorical tool that shapes the way people think. It's also something you should avoid at all costs in your writing.

What is a Hasty Generalization?

A hasty generalization is a type of logical fallacy that occurs when a conclusion is taken to be true based on insufficient evidence, usually because the sample size was small. 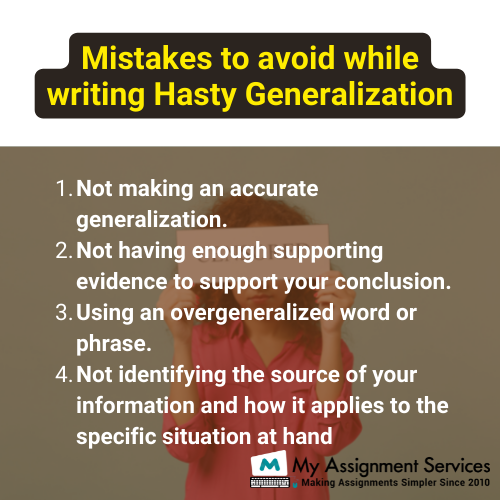 The term hasty generalization is often applied to scientific studies that contain a small number of observations and are therefore potentially misleading. This can happen when researchers use a small sample size and then make statements about their results without having run enough tests to confirm or disprove them, for example, one study might claim that eating less fat causes people to lose weight, but it will only be possible to determine if this works if many other studies are conducted using different populations and methods.

A hasty generalization is a form of fallacy that occurs when we conclude a group based on only one or two examples. For example, if you have never ridden in a car before, and you see someone who is talking on their cell phone while driving and speeding, you might conclude that all drivers are irresponsible or bad drivers. However, this kind of generalization should not be made without considering the whole population. In this case, many good drivers also use their cell phones while driving.

Hasty generalization can also be used to justify our own beliefs by using others as proof. If we believe that people who eat fast food are unhealthy and eat too much junk food, we might find it easy to justify our belief by pointing out the fact that some people do eat fast food every day and they are still healthy. However, this kind of reasoning should always be taken with caution because it could lead us into making false assumptions about other people's lifestyles.

Hasty generalizations are statements that have a single statement with a single premise and a single conclusion. These kinds of statements are often used instead of a more comprehensive argument. They are also easy to make, as they can be made by anyone and everyone.

However, hasty generalizations can lead to some pretty questionable conclusions and beliefs. They are easy to make because they are simple and easy to understand, but they can result in bad decisions based on their use. Here is a list of some mistakes you should avoid while writing hasty generalizations:

1) Not testing your hypothesis

Generalizing from just one piece of information is not enough to prove anything, you need more evidence to support your claims. If there is only one example or data point supporting your claim, it may be misleading to other people who read your article or blog post.

2) Not looking at all sides of an issue

When making hasty generalizations about an issue, it's important that you look at all sides of it before coming up with any sort of conclusion on the matter. You need to look at both sides of an argument before drawing any conclusions regarding it so that others can understand where you stand on the issue as well as why you believe what you do.

3) Failing to consider all factors

When making hasty generalizations about an issue, it's important that you consider all relevant factors before making any conclusions. If there are many possible causes for something happening, then you need to look at each one of them individually before coming up with any sort of conclusion on the matter.

When making hasty generalizations about an issue, it's important that you provide adequate evidence for your claims. This will help people understand where you stand on the issue as well as why you believe what you do.

5) Not accounting for exceptions

When making hasty generalizations about an issue, it's important that you account for any exceptions to your claim. This will help prevent people from feeling like they were being unfairly judged.

A hasty generalization is a conclusion that you jump to without evidence. Hasty generalizations are usually not helpful, and they can lead to big mistakes in your work. Here are some tips on how to avoid them: 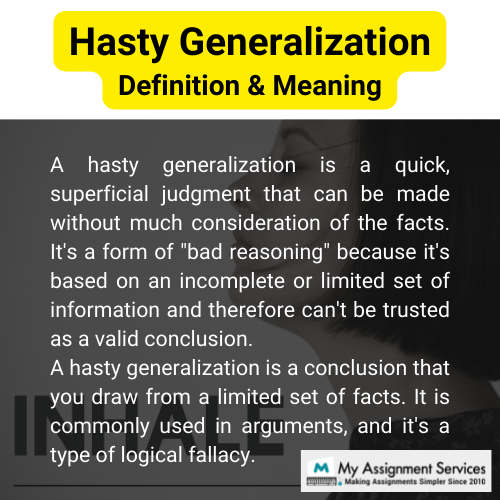 Are You Dealing with Issues in Delivering a High-quality Assignment?

Many scholars commit tons of mistakes while carrying out their assignments, and most of these mistakes are due to hasty writing. However, by now you must have learned that one of the critical skills that every writer must have is the ability to draw a hasty generalization. To attain such a level of competency, a writer must practice writing, eminently. However, if they still face a certain amount of challenge in doing so, there are several assignment writing services, which can help them in delivering a high-quality assignment. The experts at My Assignment Services are well-equipped with the required skill set for carrying out assignments for the students and helping them score excellent marks. So, what are you waiting for? Get in touch with us now!

How to Write an Abstract for an Assignment