How to Write a Descriptive Essay?

A descriptive essay is a piece of writing in which the author presents details about what he or she sees, hears, or smells. The primary motive of a descriptive essay is to give an account of an experience that feels personal to the writer. Descriptive essays are often used to talk about people and places. They are also used to illustrate how one thing is different from another thing.

What is a Descriptive Essay?

It is a type of essay that emphasizes the description of an object or event. This type of essay aims to describe a specific thing or event in detail. This can be done through a written piece or even a picture. 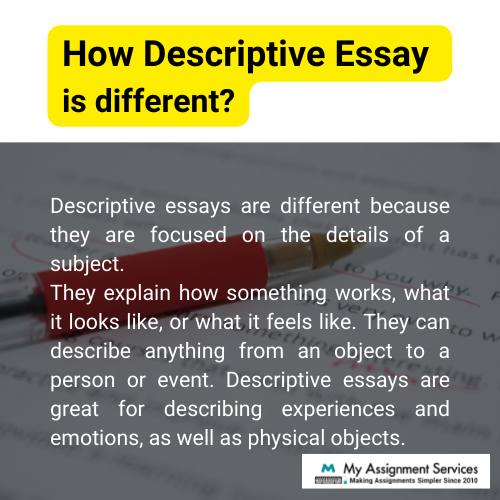 Essays are used for many different reasons and by many different people. Essays can be used for academic purposes, such as in-school assignments and exams, or they can be used as part of an assignment that isn't directly related to schoolwork. The writer will use descriptive essays to explain what they have learned about something they are interested in.

One of the main reasons why descriptive essays are used is because they help students learn more about their subjects and other things that they might not have known before. There are many reasons why you might want to write a descriptive essay. Here are some examples:

A descriptive essay should include details such as setting, characters, and action. However, it should not be overly detailed. The purpose of the essay is to describe rather than analyze the subject. Some critics suggest that for an essay to be truly descriptive, it should not contain any analysis at all; instead, it should simply describe the subject in general terms without any judgment or opinion attached to it.

Descriptive essays can be used in many ways. You may want to write a descriptive essay about someone in your family, such as a relative or friend. For example, if you were asked to write an informative essay about your grandfather, perhaps you could include some interesting facts about him when describing him to readers. Or if you're writing about someone from history who lived hundreds of years ago, you might want to include some quotes from them in your essay so that readers can get an idea of what they might have said or written at their time in life.

Tips to Write a Descriptive Essay

1. Choose a topic that interests you and one that is likely to interest other people

2. Think of your reader

Describe what you see with your eyes, hear with your ears, and feel with your senses. For example, if you're writing about the beach, you might want to describe how calm and tranquil it is. You could say that there are hardly any people around at all and that the waves are crashing gently against the shore.

4. Describe the character in detail

You could start by describing the character's physical appearance. For example, if you're writing about a friend, you could say that he is tall and thin, with short black hair and brown eyes. You could then describe his personality by saying that he's very outgoing and friendly.

5. Tell why the character is important in the story

The character can also be important because he or she affects the plot of your story. For example, if you’re writing about a friend who has brown hair and blue eyes, you might want to say that he has dark circles under his eyes because he hasn't slept much lately.

6. Explain how this character is different from others and why it makes him or her so special

You could say that he's one of the nicest people you've ever met and that he always goes out of his way to help others. You could also describe how kind he is by telling a story about how he helped you when you felt sad and depressed.

7. Make a list of possible topics for this essay and choose one of them, based on your knowledge and skills

If you don't know what to write about, don't worry because there are many things you can use as examples in your essay. However, remember that this essay must contain something new and different from others similar.

8. Research relevant topics with the help of Internet resources

You may also find useful information by reading books or watching documentaries on TV channels where you can watch interviews with scientists and experts who explain their knowledge regarding these topics. 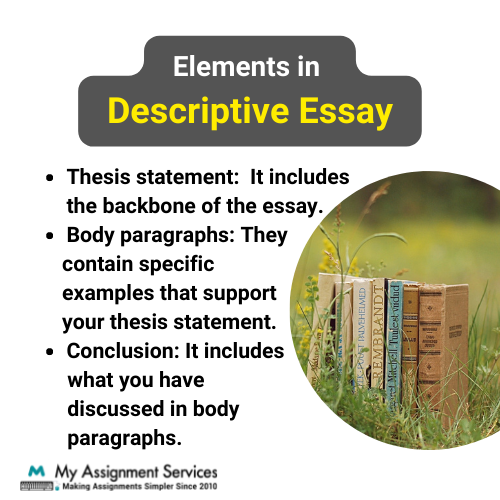 Are You Stuck with Your Essay?

Writing essays is the crucial essence of academic scholars. Students must now write essays not only to assess their knowledge and understanding of a topic but also to demonstrate their ability to present information. However, many scholars get stuck and need essay help. To resolve such a scenario, My Assignment Services facilitates essay writing assistance for students. The experts at our website write essays for the students and help them score excellent marks in their academics. For this, you just need to fill out the form and our customer support team will reach out to you instantly.

Only for Java Programmers: Top Common Mistakes to Avoid

The Negative Effects of Radiotherapy on Mental Health